Monarch Business School is proud to announce that Dr. Kanth, Professor of Economics and Global Studies at Monarch and Visiting Professor at Harvard University, has published a new book entitled: “Farwell To Modernism On Human Development In The Twenty-First Century”. The book is now available on Amazon. Professor Kanth is an economist, a philosopher, and a social thinker. His major research interests lie in the fields of political economy, social theory and policy, and women’s issues. Over the course of three-plus decades, he has taught in the areas of anthropology, sociology, political science, history, economics, and philosophy. He has served as an advisor to the United Nations in New York and on the faculties of prestigious universities around the world. His most recent book is The Post-Human Society (2015). 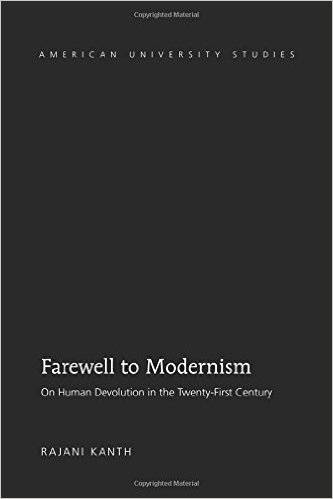 Farewell to Modernism: On Human Devolution in the Twenty-First Century is an original, pathbreaking, revolutionary, and totalizing critique of received Modernist ideas, including Modernist Utopianism. In that vein, it unseats virtually every dearly held myth of EuroModernist discourse. It offers a new episteme based on our true ontic nature—our anthropic species-being—as an offset and correction to all brands of EuroModernist idylls, be they of Left or Right, that have repeatedly brought the world to the brink of annihilation. In sum, this book argues that neither philosophy nor social science are tenable without a true, realist anthropology of the human species that sets limits to both political idealism and social engineering.

Dr. Rajani Kanth, Ph.D. holds the position of Professor of Economics & Global Studies at Monarch Business School Switzerland. He is also a Visiting Scholar at Harvard University in Cambridge, Massachusetts. Dr. Kanth is a trained Political Economist with graduate degrees in Economics and Sociology. He holds a Ph.D. and M.A. in Economics from the New School for Social Research in New York and a second M.A. in Social Anthropology from the Delhi School of Economics in India. Dr. Kanth has held visiting professorships at numerous universities and business schools around the world, including: Duke University, Tufts University, Oxford University, University of New South Wales, University of Aarhus, University of Bremen and J. Nehri University amongst others. Dr. Kanth has served as an Advisor to the United Nations in the area of International Development and has published broadly across an interdisciplinary range spanning the social sciences and humanities. He has served in editorial capacities with various world-class journals.

Farewell To Modernism On Human Devolution In The Twenty-First Century